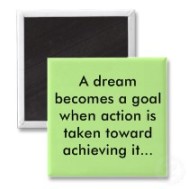 This post was originally published on this site January 2010, but still very relevant today!

I recently came across an interesting discussion in one of the social networking groups that I found quite intriguing, and downright enjoyable to read. It wasn’t about franchising. Nothing about social media. There was no mention of business. Money or finances weren’t a major part of the equation. And, surprisingly, just a few mentions about the poor economy. The discussion was actually about the concept of dreams and goals. It was enlightening that there were over one hundred responses in a relatively short period of time. Definitely a considerable amount when compared to other discussions within the same group. Often, the responses were being posted one right after the other. It seemed like people wanted to talk about their dreams and goals, almost as if they had been prohibited from doing so before.

In light of the economic troubles surrounding us today, it seems the subject of dreams and goals has hibernated like bears for winter. During good times, dreams and goals are out in the open, shared by many. Actually bragged about by some, and the end results, often materialistic, flaunted by others. It’s ironic that we’re taught that in order to achieve a goal, a key element in doing so is to enlist the assistance of people that can help us achieve the goal. Yet, in the current economic climate, discussions about dreams and goals have subsided, and almost disappeared. It’s almost like we feel guilty to have such discussions at this time. Or, that we should just be thankful for what we have and dismiss our dreams and goals as frivolous. What about the dreams and goals that are not financially driven or rewarding? Why have they been put on the back burner? Well, to all of this, I say “enough is enough.” Yes, enough of the poor me attitudes. Enough of the pity parties. And, enough of the social “rubbernecking.” (Social rubbernecking is when people excitedly talk about other people’s miseries – i.e. neighbor lost his job, their house was foreclosed on, he was having an affair – it’s just like slowing down to look at the horrific car wreck!)

NOW is definitely the time to put all the negatives aside and re-ignite the passion behind our dreams. It’s the perfect time to pull out those lists of goals and remember why we wrote them down in the first place. Why they’re important. How they’re important to people close to us. And, how our lives would be positively affected upon achieving our goals and making our dreams come true. Certainly, it’s time to face the realization that it’s up to us to make our dreams and goals a reality. They’re ours. We own them. No one can take them from us. To paraphrase a quote I’ve seen many times (in many different forms) in discussions about success, “There are people that make things happen, some that watch things happen, and others that wonder what the hell happened?” Could you tell which group of people are most successful at achieving their goals and making their dreams come true?

One thought on “What Happened To Our Dreams And Goals?”