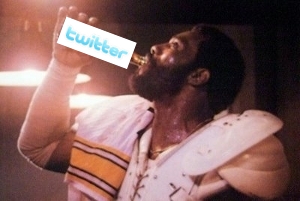 Watching the timeline on the Google real-time search results page for the Super Bowl, I’m amazed and intrigued by the steady increase of game-related Facebook and Twitter posts since midnight. I know that by game time, the numbers will be off the chart! Check out the trending results HERE and note the trending graph in the upper righthand corner.

The NFL has partnered with VISA to take advantage of the social media craze, and specifically, Twitter. A search for the NFL’s official Super Bowl site actually directed me to sbtwitter.nfl.com. This site is exciting from both the football fan and social media maven perspective. Of course, the information being shared is all about the game, fans’ opinions and bragging, and Super Bowl team and event facts. The added twist is the inclusion of former player and celebrity messages. The social media aspect shows tweet projections and trends. Combined, it makes for a truly informative and interactive experience.

From the players’ perspective, there’s an interesting article, Athletes see ups, downs of social media, that refers to Twitter tiffs, Twitter remorse, and how it’s all part of today’s game. The article points out how players tweet first and think later as it refers to a couple of NFL players tweeting about their team photo, and how Twitter has become a massive headache for NFL coaches. From a marketing perspective, it makes me think about the possibilities of integrating player, product and consumer!

Another article really interested me as it discussed social media integration with Super Bowl ad campaigns. Social media boost Super Bowl commercials’ bang for the buck, focuses on Volkswagen’s Super Bowl ad and how the company was utilizing social media ahead of the event so the commercial would not have to stand on its own. Enhancing the ad with pre-hype is one objective. But more importantly, the primary objective is to reach consumers on a personal level and to begin forming relationships. Interesting indeed!

With so many brands and marketers embracing social media on such a large, grand stage as the Super Bowl presents, it makes me continue to wonder why so many small business owners continue to cast off social media as a fad and as irrelevant for business purposes.

Check out additional results for Super Bowl and Social Media.

And, here’s a look at 30 commericals you’ll see on Super Bowl Sunday.